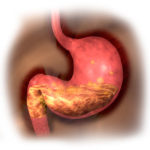 Arguably (after the chewing process in your mouth) the stomach is the first important step in the digestive process. So let’s look at the role of gastric acid and problems associated with low gastric acid levels.

In my practice, I see patients with issues ranging from atopic (allergic) and dermatological presentations (eczema, asthma, acne, psoriasis, shingles) to chronic conditions like Lyme’s, ME/CFS and IBD/IBS or rarer forms of autoimmune conditions and even mood disorders (depressive episodes and anxiety). Though all have very different issues, the one common factor in almost every case is a compromised or poorly working digestive system. Years of processed or sugary foods and poor dietary habits, stress, stimulants, and antibiotic or antacid treatments can do some serious damage to the gut. Maintaining a healthy digestive tract is paramount to achieving optimal health, because poor digestion can cause a multitude of seemingly unrelated problems, and is often the starting point for systemic inflammation and related conditions.

Gastric or hydrochloric (HCL) acid is one of the main digestive juices secreted by special cells in the stomach, together with several enzymes and something called intrinsic factor (which helps absorb vitamin B12). Its primary role is to activate the enzyme pepsin, which then helps digestion by breaking down proteins into amino acids for absorption. These are in turn used as building blocks for the body as well as for neurotrasmitters such as serotonin, melatonin, dopamine and others. In addition, the acidic stomach environment inhibits the growth of many potentially harmful microorganisms, in effect acting as a first line of defense against a number of pathogens, including food-borne ones. Stimulation and regulation of gastric acid is carried out by the autonomic nervous system (parasympathetic (via the vagus nerve) and sympathetic) as well as several hormones and chemical compounds (including histamine which is also linked to immune system function and inflammation). These tidbits of information are important when trying to understand gastrointestinal disturbances and conditions, for instance why stress is often such an important factor in IBS.

Many people think that the mainstream view that symptoms related to reflux and dyspepsia, poor digestion, food intolerances, bloatedness and nutrient malabsorption are related to an excess of HCL rather than a deficiency, and often take medications such as proton-pump inhibitors or “antacids” to help manage the symptoms (if you are on proton-pump inhibitors you must wean yourself off of these slowly, preferably with the help of a professional and never stop suddenly). Though it may be that some people produce excessive levels of HCL, in many cases the above symptoms are actually linked to an HCL deficiency and such medications can aggravate the problem in the long term.

Below are some indicative (though not determinative) symptoms associated with low gastric acid.

Low hydrochloric acid levels are very common. The older you are, the more likely you are to have low levels. There are a number of reasons for this, including stress, change in the gut mucosa due to age and the long-term consequences of nutrient deficiencies or use of certain medicines.

Gastric acid deficiency can lead to increased gastric infections, conditions linked to malnutrition, fungal or bacterial imbalance (dysbiosis), poor absorption of essential micro-nutrients (such as in the case of anaemia, vitamin B12 or vitamin D deficiency), vulnerability to H. pylori (increasing risk of gastric ulcers and stomach cancer) or C. difficile, SIBO (Small Intestine Bacterial Overload), increased risk of fractures or osteoporosis (due to poor calcium absorption), localised and systemic inflammatory reactions, autoimmune or other immune system issues, and many other conditions.

Here is a rudimentary (indicative only) home test to check your HCL levels:

Mix 1/3-1/4 teaspoon (depends on teaspoon size) of sodium bicarbonate (i.e. baking soda – making sure you get the aluminum free variety) in about 25cls of water (about half a normal sized water glass). Drink this mix about 15 minutes after waking in the morning but before eating or drinking anything else (including water). Then, with a stopwatch, begin counting how long before you begin to burp. Do this over 2-3 days to get an average.

So are there some natural ways to increase stomach acid production? The answer is yes…

And of course, don’t forget to speak with your local friendly herbalist to get individualised advice on your specific symptom picture!!!

[1] The Role of HCL In Gastric Function And Health